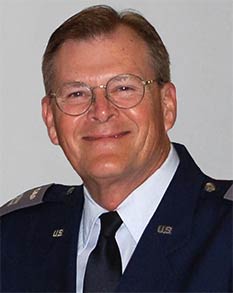 Chaplain (Lt Col) Robert Harris has been a member of Civil Air Patrol since 2007. Chaplain Harris became California Wing Chaplain June 1, 2013 after serving as a squadron and group chaplain in Southern California, Group 3, and is a Master rated Chaplain. In addition to his chaplain experience, Major Harris has earned the “Paul E. Garber” Level IV, professional development award.

Chaplain Harris has been a non-denominational minister since the late 1970’s. He was ordained in 1988 and served as a Senior Pastor at churches in Anaheim, Lake Elsinore, Menifee, Quail Valley, and Winchester, California.  He also served as an endorsed Rodeo Chaplain from 1990 to 2010 and retired from active pastoral duties in March 2010. Chaplain Harris is currently at Revival Christian Fellowship (a Calvary Chapel) where he serves in leadership as a Senior Elder.

Chaplain Harris holds an Associate of Arts degree, a Bachelor of Arts degree in Counseling Theory, and Master of Theology degree.  He serves as a volunteer chaplain for Riverside National Cemetery MHD Program and has training in Critical Incident Stress Management and Pastoral Crisis Intervention. Chaplain Harris is also trained as a Mission Chaplain for CAP and has served as a Community Disaster Relief Chaplain in the CERT program.